With a Sunday rich in XXL posters, we had to offer you a new combined bet with attractive odds which adds up to a total odds of more than 150. Enough to be sure of winning a large sum of money , even with a minimum bet. For example, a bet of €10 on these 4 encounters can win you €1,500! As a reminder, be aware that the combined bet is today the most interesting option and can be the most profitable, even in the event of a reduced bet.

And for this Sunday, November 6, here is a combi not to be missed with 4 interesting matches. And if you want to try your luck on this combined bet, here is an offer not to be missed, since the sports betting site Parions Sport en Ligne makes you win up to €100 in freebets by betting up to €100 and €10 offered without deposit with the code FML1.

Shock at the top of the Ligue 1 table between Lorient and PSG. The Breton club, currently 4th in the championship, remains on two draws in its last three L1 matches. Always very difficult to maneuver at Moustoir, the Merlus should cause a lot of problems for a Parisian team whose stars will no doubt already have their heads in Qatar and the World Cup and who will especially not want to get hurt. This perilous trip therefore falls badly for the band of Christophe Galtier, uninspired during their last clashes with Lorient (a victory and a draw for Lorient against PSG in the last two seasons). A draw is quite possible and a shot to try, especially with odds of 6.30.

If there was no photo between the two teams in recent seasons in the Premier League, this season is clearly more that of Arsenal than that of Chelsea. And for this new London derby, it’s limit Arsenal which arrives at Stamford Bridge with the label of favorite thanks to its status as leader of the championship. But the meeting is likely to be disputed and animated between two teams which generally go blow for blow and which remain on two victories each during their last 4 clashes. Graham Potter’s Chelsea are still recovering and remain on two sluggish victories in the Champions League and two draws and a defeat in the Premier League. Quite the opposite of the Gunners who lost only once away against Manchester United and drew a sluggish draw against Southampton. It was during his last trip to the PL. It should be the same on the lawn of the Blues.

Between a cascade of injuries, disappointing results, elimination from the Champions League, nothing is going well for Juventus Turin at the start of November. And now four days after losing to PSG at Juventus Stadium stands another European cador, Inter Milan. The Lombard club, which emerged from the group of death with Bayern and Barça, arrives with high morale this Sunday and on an ongoing series of four consecutive victories in Serie A. What to expect a Milan victory against Juve, as in the last three clashes between the two teams.

Still traumatized by the sinking of his team at the end of the match against Tottenham where his team lost everything, Igor Tudor showed up at the Orange Vélodrome weakened and with low morale. Not the best state of mind before facing OL in the always eagerly awaited Olympico. The Rhone club, which is doing much better since the arrival of Laurent Blanc, should take advantage of the emerging crisis brewing at OM to push the Marseille club a little further and weaken the position of the Croatian technician even more. A narrow victory as in the last two matches of Olympique Lyonnais is logically possible. 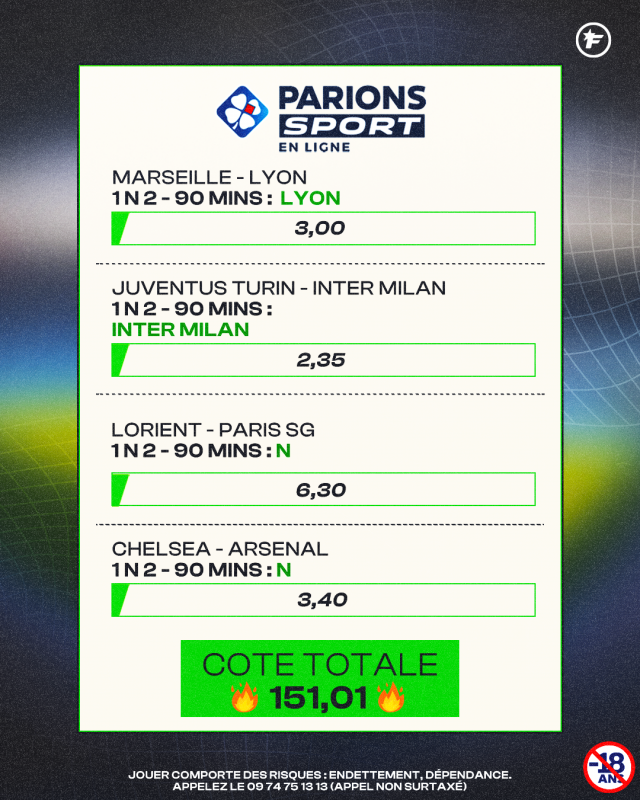 (*odds subject to variations) (**offer only for new subscribers)