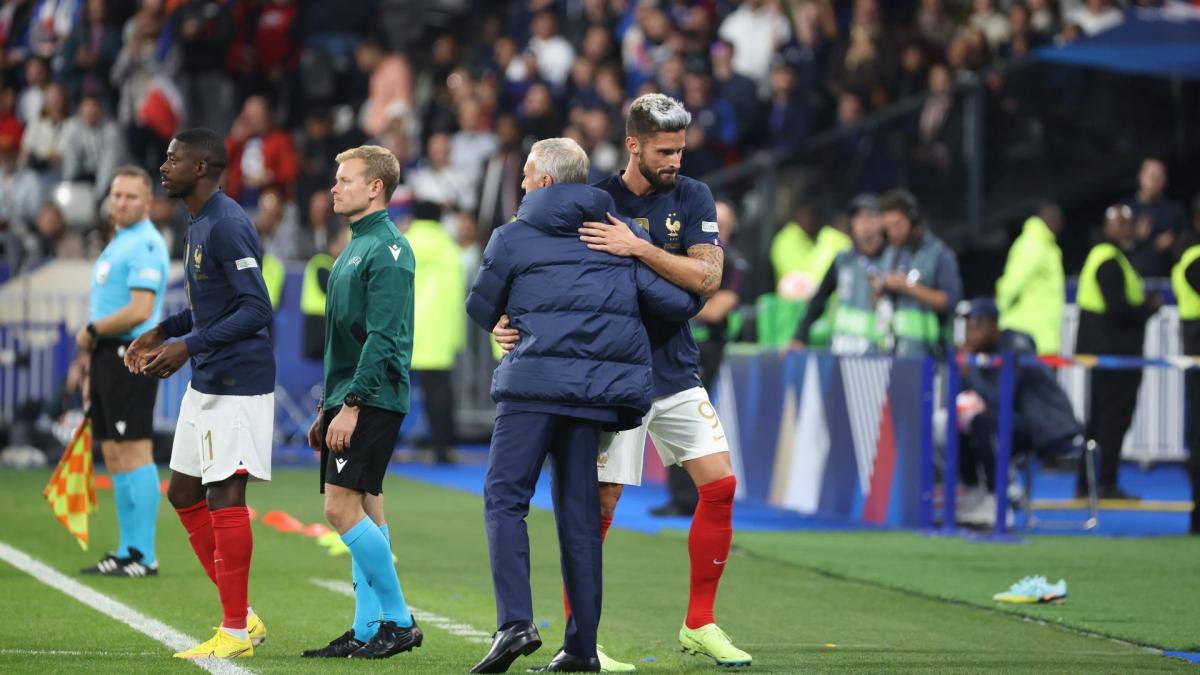 Back with the Blues in the absence of Karim Benzema, injured, Olivier Giroud largely seized the opportunity that Didier Deschamps offered him, this Thursday evening, against Austria (2-0). Aligned alongside Kylian Mbappé in the 3-4-1-2 of the French team, the AC Milan striker has, in fact, weighed on this meeting and more particularly on the Austrian defense. Results ? A goal, the 49th in the tricolor jersey, a decisive pass and another high-flying performance at the forefront of the French attack. No matter the springs that pass, the one who became, at 35 years and 357 days, the oldest scorer in the history of the Blues – overtaking Roger Marche, scorer at 35 years and 287 days in December 1959 against Spain – continues to shine, despite a context that is more than difficult to manage.

Relegated to the hierarchy for several months, the native of Chambéry hardly gives up and still wants to believe in his lucky star. Taking advantage of the slightest opportunity to put himself to his advantage, Giroud has, once is not custom, ignited the Stade de France and its 70,000 spectators this Thursday evening. Head scorer – on a caviar from Antoine Griezmann – the Milanese (49 in 113 caps since 2011), who scored 7.5 by our editorial staff, thus came close to His Majesty Thierry Henry’s 51 goals . A new first-class performance for the one who continues to panic Serie A in the Rossoneri jersey (5 goals and 1 assist in 9 matches in all competitions since the start of the season). Valuable in keeping the ball, omnipresent in passing circuits, imperial in the air, like his goal, Giroud also shone with his deflection game, bringing a certain fluidity to the front of the attack.

Decisive passer on Kylian Mbappé’s opener, author of a sparkling rush, the former Chelsea striker (again) held his rank, showing – in passing – to his coach that he could rely on him . Enough to hope to see Qatar? “I did not say that I was going to deprive myself of it. You draw conclusions”indicated, in this sense, Didier Deschamps, questioned by the chain The Team on a possible presence of the AC Milan striker at the World Cup which will take place from November 20 to December 18. Relaunched on the subject, at a press conference, the former coach of Olympique de Marseille then did not fail to praise the attitude and regularity of his protege. Without specifying that his place at the World Cup was acquired. Far from it.

“He scored, good for him. He is in an excellent state of mind, he participated in a lot of animations and offensive actions. As almost always. He has found himself in very very very (he insists) complicated situations in recent years, with little or no playing time, and every time he was in the France team, he was successful. It’s very good for the France team. I am very happy for Olivier, he deserves it. If I call him and put him on, it’s to be good and score goals. May he continue to perform well. (…) Did I tell you that he will be there or that he will not be there? Neither. We will have to wait until November. He does everything to make sure he is there, but since there is a lot of competition in all positions.admitted Didier Deschamps.

As a reminder, the 53-year-old coach recalled, recently in Telefootthat Olivier Giroud no longer had the same status with the Blues. “I have always considered that a player who has a status must keep the same status in the France team. Humanly, it’s very difficult when you don’t keep it”. A way not to give too many false hopes to the number 9 of the evening? One thing is certain, due to his impact, his particular profile and his regularity, Giroud appears more than ever to be a serious candidate for the next World Cup. Asked about the performance of the latter, Kylian Mbappé also seems to validate the contribution of the Rossonero. “We got along well, it was a great meeting, even with Antoine (Griezmann), because he played higher today. We managed to combine, to speak the same football, it was satisfying. In addition, he was able to score and get closer to Titi’s record, I think, for him, it’s a good evening. A plus for us? Sure ! When you’re the second top scorer in the France team, if you’re not a plus, you’ll never be a plus! He did us a favor again today.. It now remains to be seen whether the last outing of the Blues, this Sunday against Denmark, will be enough for Olivier Giroud to definitively convince his coach not to boycott him … for Qatar.

35a & 357j – Thanks to his goal against Austria, Olivier Giroud becomes this evening, at 35 years and 357 days, the oldest scorer in the history of the French team, overtaking Roger Marche (35 years and 287 days in December 1959 against Spain). Briscard. #FRAAUT pic.twitter.com/0u5ORYB3I8