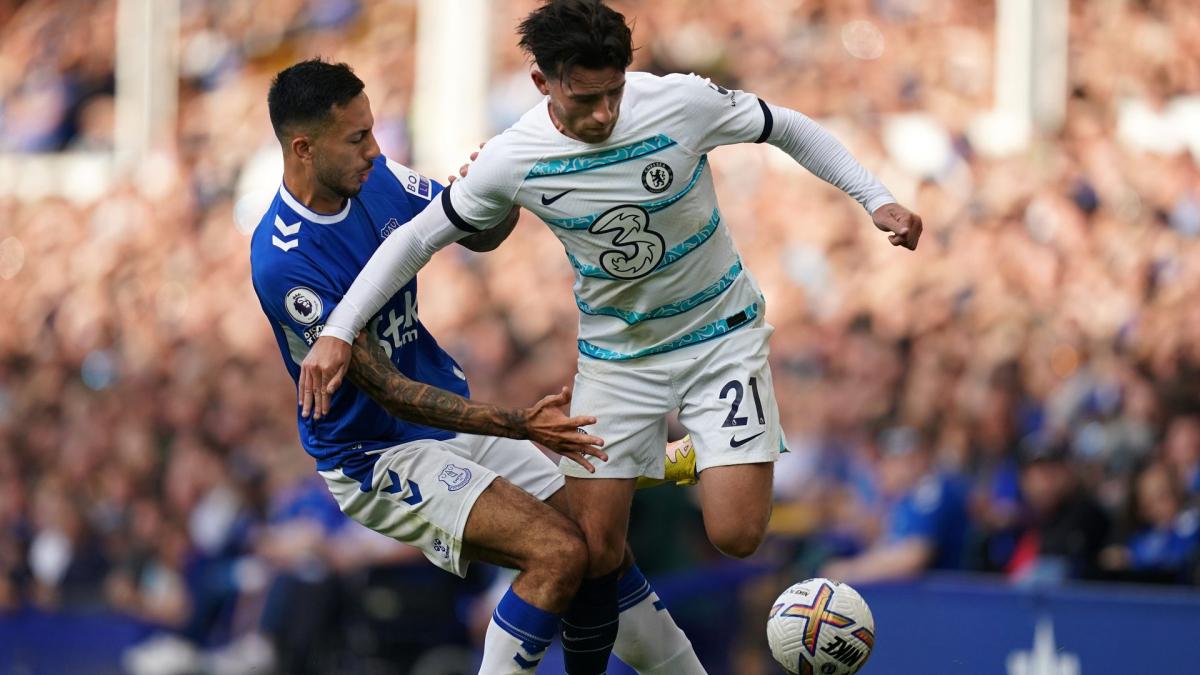 After Liverpool’s misstep against Fulham (2-2), just promoted to the Premier League, and Tottenham’s big victory against Southampton (4-1), the first day of the English championship continued this Saturday. at 6:30 p.m. In the lair of Goodison Park, Everton, sixteenth last season, hosted Chelsea, third in the previous year. For this meeting, the Toffees, deprived of André Gomes (muscle injury), Andros Townsend (cruciate ligament), Asmir Begovic (ankle), Dominic Calvert-Lewin (knee) and Tom Davies, presented themselves in 3-4-3 with Gray, Mcneil and Gordon on the front line of the attack. In the absence of Ross Barkley (thigh) and Timo Werner (ischio), Thomas Tuchel lined up a 4-3-3 with Koulibaly, Azpilicueta and Sterling, new Blues recruits.

In a relatively closed start to the game where Toffees and Blues neutralized each other, Everton suffered the first blow. Hit in the right ankle after a tackle in the feet of Havertz, Godfrey quickly gave way to Holgate (18th). A few seconds later, Mount took advantage of a nice three-way combination to trigger a nice shot but Pickford made a nice save. Worried, Frank Lampard’s men were also dangerous. On a cross from Mykolenko from the left side, Gordon placed a sharp header but Mendy deflected with a one-handed tap to deflect the ball just above his crossbar (24th). Dominating the game, the Blues still struggled to be dangerous. And if Sterling thought of registering, just before the break, his first goal in the jersey of the Blues in the Premier League, Craig Pawson finally sanctioned the English striker from an offside position (43rd).

Held in check, Chelsea then took advantage of the ten minutes of additional time at the end of the first act to make the difference. Unbalanced by Doucouré in the area, Chilwell obtained a penalty which Jorginho transformed without shaking (0-1, 45 + 9th). In front of the break, the London club was very scared when they returned from the locker room. Launched in depth, Gray was much faster than Silva but the Brazilian defender finally came back to divert the ball and save Mendy (48th). In the aftermath, Doucouré also tried his luck after a huge mess in the Blues area but Mendy was still there (52nd). Master of the debates but sometimes worried, Chelsea controlled this meeting quite (too?) quietly.

Determined to keep this slight advantage, Thomas Tuchel brought fresh blood a few minutes from the end of this game. After Loftus-Cheek and Pulisic, the two new London recruits Broja and Cucurella then appeared. However, the new faces present on the lawn of Goodison Park did not change the rhythm of a particular and choppy meeting. Solid defensively, Chelsea even thought to double the bet but Sterling, well found by Cucurella, finally saw Mykolenko intervene in disaster (82nd). Not very flamboyant but serious collectively, Chelsea kept this narrow lead on the scoreboard. With this result (1-0), Thomas Tuchel’s Blues are in sixth place. For its part, Everton is 16th.

The official line-ups at kick-off

Our first XI of the season 🔵#BISHOPRIC pic.twitter.com/GPBxd6XMxz