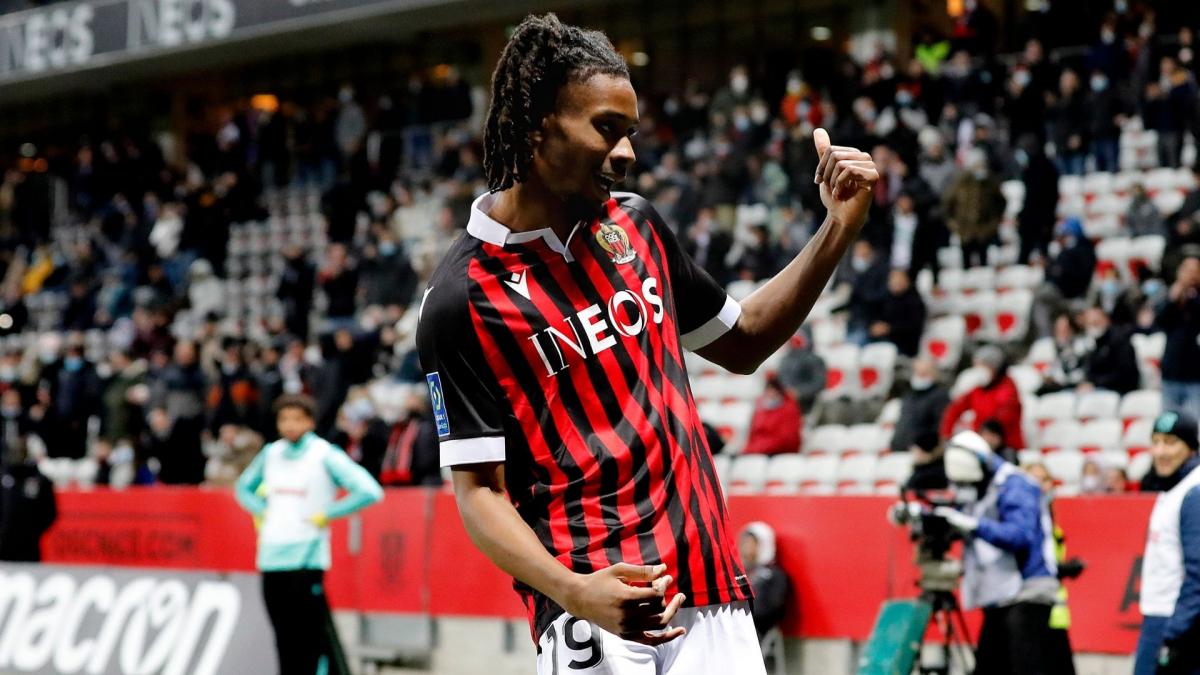 On this Friday evening, OGC Nice received FC Nantes at the Allianz Riviera to keep their place as runners-up, currently eleven points behind the leader, Paris Saint-Germain. To take the three points against the 9th in Ligue 1, Gym coach Christophe Galtier had to make his eleven without Bambu (injured), Atal, Lemina (CAN) and Schneiderlin (suspended). He then offered his usual 4-4-2 with the offensive doublet Dolberg-Gouiri, and the first of the left side Amavi, on loan from Olympique de Marseille during the winter transfer window. On the side of the Canaries, Antoine Kombouaré also had to deal with several absences between the CAN (Castelletto, Simon) and the physical glitches (Pallois, Cyprien). The Nantes technician aligned a 5-4-1 with the first tenure of Sylla (21 years old), in central defense alongside Girotto and Corchia. Bukari accompanied Kolo Muani and Blas in attack.

The first act of the meeting turned on the Nice side, well present in the opposing half of the field. This domination of the Rouge-et-noir was materialized by the helmet shot of Kasper Dolberg, well captured by Alban Lafont (9th). Nevertheless, Nantes had the opportunity to score against the run of play through Randal Kolo Muani, who left almost alone on goal after Dante’s blunder, but Walter Benitez’s perfect exit kept the Gym in the match (16th). But the OGCN opened the scoring on a hand foul by young Abdoulaye Sylla, cautioned a quarter of an hour into the penalty area, allowing Dolberg to open the scoring from the penalty spot and score his 6th goal the season, the second against the Canaries (1-0, 21st). If the ball was confiscated by the men of Galtier in the first period, the FCN managed to put the two formations equal just before the break on a set piece caused by Dante, warned for his fault (44th).

Surprised, the Gym is recovering well

At 30 meters, the Brazilian Girotto sent a low shot deceiving a reproachable Benitez, not having a firm enough hand to deflect the ball (1-1, 45th). On returning from the locker room, Nice kept possession of the ball but seemed more patient than in the first period. Very available, Amine Gouiri picked up a lot to participate in the game of Nice and the French international hopefuls had been decisive before the hour mark. On a breakthrough ball at the foot of Khéphren Thuram, the Gym midfielder combined with the he former Lyonnais at the entrance to the penalty area to throw him into the zone of truth and crucify Lafont to restore the advantage to his team (2-1, 56th). Behind, Nantes was trying somehow to come back to the score and was not far from breaking with the entry of the former Montpellier resident Andy Delort, alone against Lafont, but the last bastion of the visitors came out well twice. (63rd, 67th).

Antoine Kombouaré’s men showed themselves conquerors after the double action of the Algerian international, seeing the opposing block retreat over the course of the match. Ludovic Blas found the post with his low shot at ground level (69th) before participating in the high circulation of the ball, forcing the 11 Azureans to defend in their last 30 meters. By bringing in new blood in the last quarter of an hour (Pereira de Sa, Geubbels, Augustin), the Nantes technician clearly revealed his offensive ambitions to seek the point of a draw against Nice operating in counterattacks with Delort and Calvin Stengs . Nevertheless, the locals kept the lead until the final whistle, synonymous with a fifth consecutive victory in all competitions. The OGCN temporarily takes a three-point lead over Olympique de Marseille, who still have two matches to play. Nantes remains stuck in 9th place and misses the opportunity to approach the European places.