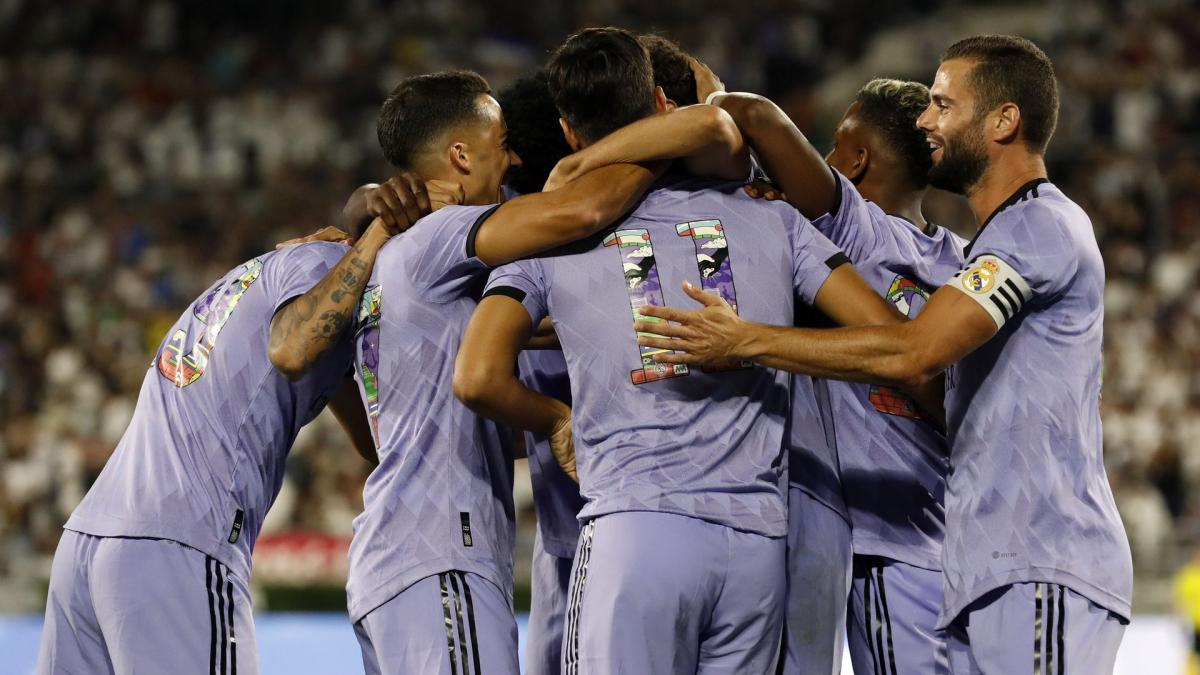 At the end of an open match, Real Madrid won late in Almeria (2-1) this Sunday, on behalf of the 1st day of La Liga. Precisely, the start of the match is to be credited to the players of Joan Francesc Rubi, who were the most impactful during the first minutes of the match. First through Ramazani, who hit full axis and shifted for Chumi. Number 21, at the edge of the penalty area on the right side, saw his half-hearted shot end up in the arms of Courtois (2nd). A few minutes later, Ramazani, still him, was launched deep by Samu, with a superb outside right. He went to challenge Courtois in a face to face which he won to sign the first goal of the match (1-0, 6th). Following this achievement, Real Madrid reacted immediately by putting pressure on Almeria’s nets.

Valverde tried his luck, but Martinez relaxed to push back for a corner (7th). Following this, a strike from Benzema flew over the goals of the Andalusian goalkeeper (10th). After weathering the storm with experience, Almeria had the chance to double the lead. After Tchouameni lost the ball in midfield, Sadiq recovered and advanced to 16 meters. The Nigerian armed a heavy strike which passed just above the cage guarded by Courtois (13th). Very intense at the start of the match, the match lost momentum and the chances became rare. Benzema sent a little shiver to the Almeria supporters, but Babic, on the trajectory, deflected for a corner (20th).

The match continued on a false rhythm with no real chance on either side until a cross from Kroos for Benzema. The Frenchman, who took the depth and outstripped two Almeria defenders, saw his head unbalanced, found the niche of the Almeria goalkeeper (28th). Real Madrid continued their equalizer mission just before the break by increasing the pressure on Martinez’s goal. Vinicius, launched deep on the left of the surface, stumbled on the goalkeeper of the Andalusian club (37th). Then it was Rüdiger’s turn to be dismissed by Martinez, on Real’s tenth corner (40th). The last action of the first period was for Real and Valverde, who volleyed a cross from Kroos. The goal was logically refused by the refereeing body, the Spaniard being in an offside position on the center of the German (43rd).

In the end, it’s always Real Madrid who win…

The second period started like the first, with great intensity. After Camavinga was replaced by Modric from the start, Vinicius sent a cross shot on the outside of Martinez’s post, surprised by the trajectory of the ball (47th), before Valverde signed a volley well countered by the goalkeeper of the promoted (52nd). Almeria as in the first act, did not let it go and responded to Madrid’s attacks, but Courtois kept watch (53rd, 54th). The last will of the condemned, because Real Madrid ended up finding the net a few minutes later. Benzema first had a great chance on a pass from Vinicius (55th). It was finally Vazquez, well placed following a scramble, who scored the goal that equalized for Real Madrid (1-1, 61st). Despite a very good score, Babic’s teammates ended up cracking. Ferland Mendy left the lawn, replaced by David Alaba (74th). And what coaching from Ancelotti!

Just entering the game, the Austrian defender took charge of a free kick slightly off the right at 20 meters, obtained just before the substitution. He wrapped a love shot from the left over the wall, which taped Martinez on his line (1-2, 75th). Retractable pole, simply magnificent. After this jewel, the match lost in intensity, the players having multiplied their efforts throughout the meeting. The people of Madrid still had a last thrill on a cross from Akieme which was taken over, after a small mess, by Curro whose shot was stopped in two stages by Courtois (85th). A few minutes from time, Real Madrid could have widened the gap. After a cross on the left side, Vazquez, who arrived in second blade, triggered a strike that Martinez deflected by diving to his right (88th). Finally, the last action of the match was for Almeria. On a free kick from 40 meters, Curro centered in the box for Babic’s header. No worries for Courtois who grabbed the ball without a problem (90 + 3rd). Real Madrid leave Andalusia with a precious victory to start their season. Especially since it was acquired in difficulty against a brave opponent.